A few months ago I wrote a blog post about Rachel Dolezal.

I wrote about how I watched the Netflix documentary on her and how I felt like the documentary did not really add anything about her to my own personal opinions.

After I watched the documentary I still wondered who this woman was to say she was in fact, Black. But, seeing that she had published a book, I felt it only right to read the words that she herself put on paper about her life.

It was only fair; that is how I operate. I read about the things I do not agree with to further fuel or disprove my own personal opinions.

Which is exactly what I did…

First off, let me say that this woman NEVER looked Black to me. The first time I saw her I remember thinking, she’s a white girl with some color. Period. Unlike the first time I saw Meghan Markle I was so excited to see a mixed race girl; telling my husband our daughter had a real shot at becoming a Princess now.

I am not going to excuse Ms. Dolezal, or Nkechi Amare Diallo as she has reportedly legally changed her name to. I still do not 100% understand how, when asked if she was African American, she said yes. Because she is not – and she acknowledges she is not.

In her book, she states she answered yes out of confusion. She says that African American and Black are synonymous with one another but clearly states that the term African American means having a connection, through ancestors, to Africa itself and Black is the actual race of someone. So if she knows the difference, I am not sure what is confusing about it. At some point in the book (or maybe the documentary), she states that we are all from Africa; we all have black mothers. Which makes that whole explanation a little tongue and cheek for me.

Overall though, I surprised myself and was VERY impressed with the book. I can see where she is coming from and how she can feel she identifies with the Black culture.

Rachel grew up in the middle of bumfuck nowhere. Her parents were insanely religious and made her feel like shit since she was born. Her brother was idolized while she was dismissed. Rachel was homeschooled and everything her family consumed or had was made from scratch, from the earth and she was responsible for doing most (if not all) of the work to attain those things. Her family taught her lessons in the most insane ways.

The first story in the book paints a story of Rachel at the breakfast table eating breakfast one morning. And instead of the luxurious cereal, they usually had, prepared with some sort of oatmeal, meal. Rachel goes on to say how she hated the texture and it actually made her throw up, into her bowl. Her father was so displeased that she was trying to waste food that he made her mother keep the bowl in the fridge for when she got home from school so she could finish it then. Vomit and all. And Rachel was made to finish every last bite in the bowl; vomit, and all.

That was the story that really got me to take this book seriously.

After that, we learn about when she was finally sent to public school and how she was unable to fit in with most of the students because of her handmade clothes and odd lunches (no PB&J for her; not even close!). Rachel found that the only students that would let her sit with them were the handful of black students in the school. And to me, that is where I think the connection to the Black culture began.

Black people in their own inability to fit in accepted her for what she was. (A crazy white girl) From there, in my opinion, she took it and ran. She felt that Black people related with her in more ways than white people did.

Honestly, I think Rachel Dolezal is more black than I am!

If I was asked to choose between Leonardo DiCaprio and Idris Elba, like Rachel was during an interview I’d pick Leonardo… All. Day. Long.

There was a part where Rachel says that she felt extremely uncomfortable in white settings, but also could not feel fully relaxed and reveal everything in Black settings either. I am Black, I do not feel like I am a white girl trapped in my body, but I feel the same way. I attribute that to my living in a prominently white area all my life. I am always the exception to the unwritten rule.

I thought the book was beautifully written and she clearly knows her Black history. To me, she has been nothing more than an advocate for Black people.

Why she would want to take on the struggles of being identified as a Black woman, I am not entirely sure. It is hard. It is so incredibly hard. But if a boy can think he was born a girl; why can’t a white girl think she was supposed to be a Black girl.

In Rachel’s own words she thought, living as a Black woman made her life infinity better. My notes to that statement were, I must have missed that memo!

I think the media and public were unnecessarily unfair to her. Out of all the things that people are doing out in the world, this is not the crime of the century. You can tell from reading her book that she has a deep love for the Black culture. You can feel all the love and respect she has for the culture.

Whether you agree or disagree with what she has said or done, you can tell you one about Rachel… she is a woman (white or Black) who was free and self-reliant. And that alone is something to applaud. There are so many women (white or Black) that lack the ability to be who they truly are in this world.

Like most women in the world, Rachel just wanted to feel beautiful by her definition when she looked in the mirror. Girl, if you want to have that kind of struggle in your life. A struggle many of us would not ask for if we had the choice. Have at it…

“I just want to apologize for being so wrong about you.” 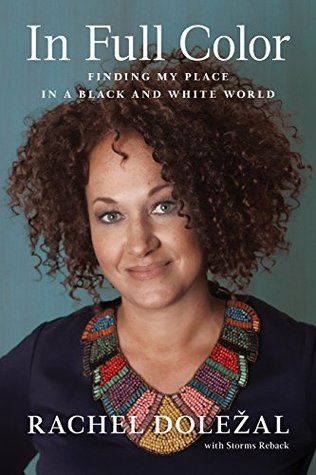 If you can have an open mind and actually want to know what this woman is about I would highly recommend anyone read this book. You might learn something not just about Rachel Dolezal, but about yourself. The ratings on this book are unfair and could not have been by people who actually read this book. Because I find it hard to believe anyone who actually read this book would rate it, in its entirety, so poorly. That does not mean I agree with everything Rachel said, or the connections she made between her life and slavery… but I definitely closed the book saying, I get it, girl.